Among Us Game Review 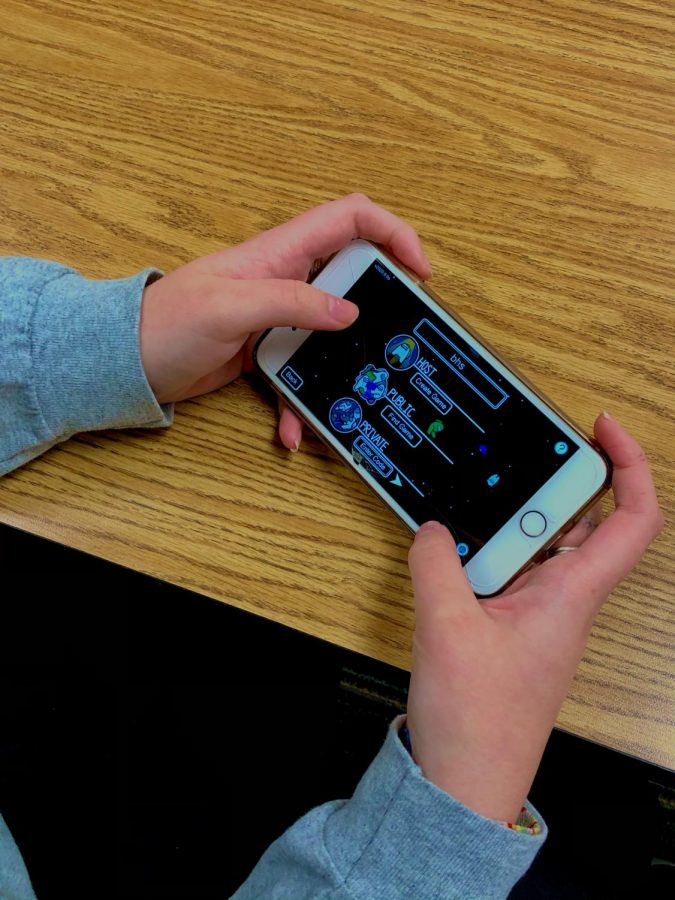 Senior Kayla Doll plays Among Us on her cell phone.

Among Us is a game created by Inner Sloth that launchedon June 15, 2018 across the platforms of Microsoft Windows, iOS and Android. The game has gained popularity over the past two months due to popular twitch streams and YouTubers. The person that truly started the games uprising was Sodapoppin. Otherwise known as Chance Morris, the 26-year-old YouTube and Twitch influencer from Texas started to stream videos of himself playing the game to his 2.9 million Twitch followers. During the middle of September other social media stars from all platforms started to play the game like James Charles, Mr. Beast, and even the US Representative of New York’s 14th District, Alexandria Ocasio-Cortez with 5 million views.

Among Us is a multiplayer game where everyone is put onto a spaceship and given two roles. The crewmate position has a set number of tasks to complete without being killed. The Imposter whose main goal is to sabotage and kill everyone.

The Imposter has to be one of my favorite roles just because of how sneaky they can be because they have the opportunity to vent (being able to sneak from room to room without being seen), but the challenge with venting is anyone and everyone can see you hop in out of one.

If you see a dead body,  someone go under the vent, or act “sus” you are able to go to the cafeteria and hit the emergency meeting button where you are able to discuss with the other crewmates using the chat button and can decide who you want to vote out of the game, or you can choose to skip and not vote anyone. For example, someone might say “Orange is sus because I saw them vent and also fake a task.” Everyone in the game who is not dead can pick to question Orange and Orange has a chance to explain themselves and if they have a good enough believable explanation of what they were doing or why they were not the Imposter everyone can decide to skip the vote and continue playing the game.

I was introduced the game through a friend, and I have not quit playing it since. Many of my friends will group Facetime and fall down a black hole of playing the game for almost 3 hours.

“I think it’s so addicting because it’s fun to meet up with friends and strangers to talk with them and solve the mystery of who the Imposter is,” junior Emily Seagren said.

If I had to give the game a rating from 1-10, I would give it a 7 just because there are a lot of things that need improvements, but I did hear that there were new updates coming to the app including a feature for people who are color blind by putting symbols on the characters so it was easier for them to play the game which I believe is a very smart Idea. I would highly recommend the game to people who like to be apart of the mystery and being involved in a multiplayer game!