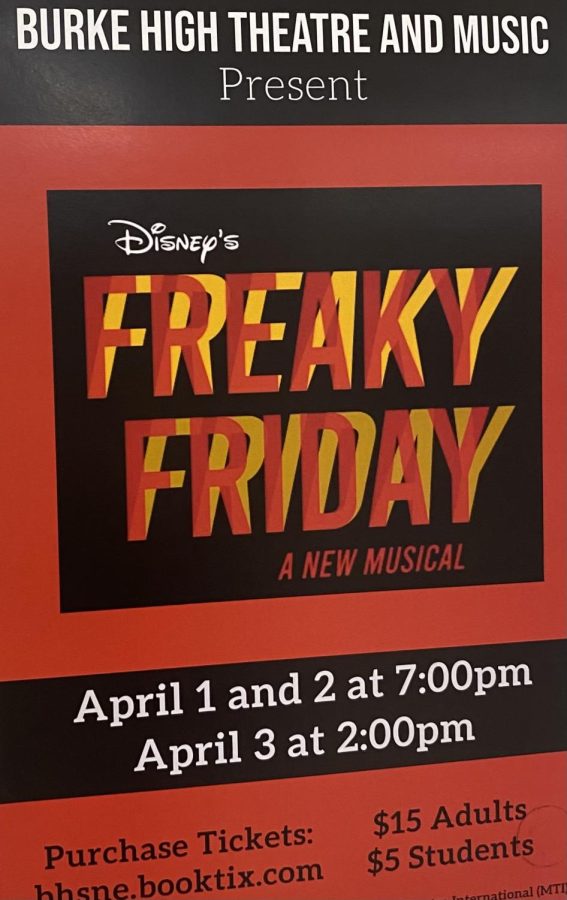 Burke High School’s theater department performs their spring musical every year, and they are adding another production to their show list this year. Big Fish, Shrek, Beauty and the Beast, and Into the Woods are just a few of Burke’s musicals from recent years. This year, Burke’s rendition of Disney’s Freaky Friday will hit the stage, and the past few months have been filled with preparation for this production.

Freaky Friday is a musical full of singing and dancing, which takes lots of rehearsals to perfect. Senior Brianna Nash plays Ellie Blake, one of the lead roles in this musical, and has been in the school musical every year since her sophomore year. She has gotten to see and experience the impact the rehearsal process can have on the final product.

“We have been in rehearsal nearly every day for the past couple of weeks, and it’s incredible to see the hard work everyone involved is putting in,” said Nash. “Every day the show gets better, and it is so heartwarming to see peers open up on stage.”

Although the rehearsal process has been going on for a few months now, the cast and crew have utilized their practices to not only make the musical grow, but to make new friendships along the way.

“The best thing about theatre is the friendships you are able to make during the rehearsal process,” said junior Kate Anderson, who plays Katherine Blake in Freaky Friday. “This is one of the most positive and hardworking casts I have ever been a part of, and I am so grateful for all of them!”

This year has given more students the opportunity to be in the musical, as last year students who were fully remote were not able to participate. Lucy Reid is one of these students, and Freaky Friday is the first production they have been a part of the cast rather than being a crew member.

“After being online last year, I wanted to take advantage of all the things I missed out on,” Reid said. “I already love to sing and dance, so I wanted to step out from behind the scenes for this show.”

This is the last school musical for graduating seniors, but even returning theatre members have aspects of the musical they will miss. Junior Cooper Strickland, who plays Adam, still has one more musical left in his high school career, but leaving this one behind is still difficult for him.

“We’ve still got some time left with this musical but I can tell already I’m going to miss the atmosphere, the people surrounding me and the time we have spent together,” said Strickland. “It’s always a great experience and I’m glad I still have one more musical to go.”

Performances of Freaky Friday will be on April 1st and 2nd at 7 pm, as well as on April 3rd at 2 pm in the Burke auditorium. Tickets are on sale now, costing fifteen dollars for adults and five dollars for students.