Billie Eilish in the Metro 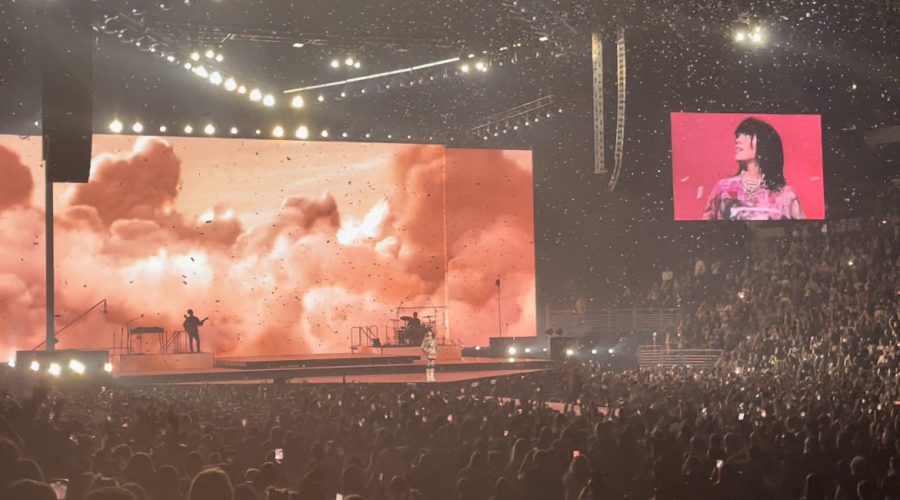 Two years in the works, Billie Eilish finally performed at the CHI Health Center on March 16. Originally delayed due to COVID-19, Eilish’s world tour, Happier Than Ever, has taken off, with Omaha being her 21st stop.

Billie Eilish is the face of music for this next generation. Unlike other teeny-bopper artists, Eilish stays true to herself and her fans. There are no flashy outfits, no backup dancers, no need to come up with a persona that isn’t who she is. Instead, Eilish focuses solely on her music and how it makes her fans feel.

Eilish had her big break back in 2015, with her hit song, “Ocean Eyes”. Since then, she has gained an enormous fanbase across the world. Even from the beginning, Eilish never played into the stereotypical image of a teenage pop star. She created her image of wearing baggy clothes, wearing loads of dangly accessories, and frankly, not caring what others thought of her.

In an interview with Elle Magazine, the singer explains why she chooses to wear loose-fitting clothes.

Her reasons for not following norms hit home to a lot of her fans and allows them to connect to Eilish on a more personal level. This is one of the many reasons why this concert was so anticipated. Seeing Eilish not do dozens of outfit changes and wearing what she would in her daily life allows fans to understand that there is no need to be someone you’re not.

For this particular concert, general admission was sold the morning of the big show. These tickets were for the pit, and the lines that were created just proved how excited everyone was for her debut in the Metro. Besides Morgan Wallens earlier this year, CHI Health Center hasn’t seen a bigger artist since before COVID. Even then, Omaha doesn’t attract many big artists, so to have the opportunity of Billie Eilish performing was one that couldn’t be passed up.

Getting to the concert, everywhere you went, there were crowds upon crowds of people. Going through security, in the merch lines, even just getting to your seats. I hadn’t seen a crowd this size since Shawn Mendes performed back in 2017 and even then, this concert felt more packed.

The opening was artist Jared Lee, known by his stage name, Duckwrth. I had never listened to any of his music upon hearing his set, but that didn’t matter. The atmosphere and energy he created had everyone moving around. The flashing lights, the energetic dance moves, the band all contributed to hyping the fans up for Eilish. He was a great opener for this concert. He met the vibe of Billie’s music and his presence on stage was amazing. He made sure to show everyone that he belonged on that stage, especially with his Michael Jackson-tribute sparkly shoes.

After Duckwrth, the air was filled with anticipation. My only complaint from this concert would have to be the intermission from the opener to the main artist. If there was a timer telling everyone how long until the artist went on stage, that would be amazing because then I wouldn’t feel like I would be jinxing myself if I got up and got something to eat. Besides that, the moment that Finneas (Eilish’s brother and music partner) and her drummer Andrew Marshall started playing, the crowd erupted. The opening song, “When We Fall Asleep, Where Do We Go,” from her sophomore album had everyone already jumping around, screaming the lyrics to the top of their lungs.

Eilish was very talkative with the audience. She made sure that everyone was having a great time, with her one rule of the night being that everyone had fun.

“There’s one rule for the night: Have. Fun. It’s not cool to not have fun. Move your body. It doesn’t matter tonight. Just do what you feel like doing,” Eilish told the crowd.

Throughout her 28 song, 100-minute set, Eilish sang almost all of her released songs. The popular favorites, of course, were songs like “Bad Guy,” “Lovely,” “Therefore I Am,” and “Happier Than Ever.” Each song was sung by the crowd, all matching Eilish’s energy. At times, Eilish had to ensure that the crowd was doing good, and when a few fans started fainting, she made sure everyone had water and was cared for.

“Can we get bottles of water to these people?” Eilish asked. “If you feel lightheaded, tell somebody please. You guys have got to be OK. I worry about you.”

During these times, she asked everyone to sit down in their seats, and she would play her slower and more meaningful songs. This was like nothing I had experienced before at a concert. However, I loved it. It truly felt like she had the crowd’s best intentions in mind, and she was looking out for us, something that is hard for some artists to establish.

My favorite part of the concert was when Eilish moved from the main stage to a secondary stage, closer to my seat. This stage raised her and spun her around the back of the arena. During this time, she sung, “Overheated,” “Bellyache,” and paid tribute to her hit song, “Ocean Eyes.” It was surreal. Seeing her up close like that felt like a dream. It’s true about what people say how celebrities don’t feel like real people until they are right in front of you.

Eilish ended her show with, “Happier Than Ever.” This was the best song to end the night and concert with. It wrapped up all the emotions and the highs and lows of her songs. It’s such a beautifully written song and to hear it live was even better. This song allowed everyone to take in the past two hours of the concert and end it in a peaceful way. Confetti fell to the floor while she sung, everyone swayed back and forth, phone flashlights moving like a wave.

This concert was probably the best one I have ever gone to. I didn’t feel incomplete at the end of it, like there was songs missing. In fact, this was the first concert that I knew every song that the artist performed, and she played my favorite songs absolutely perfectly. Besides an artist, Billie Eilish is a great person and it really showed during the concert. She’s someone that is respected in the industry but also as a role model to young people everywhere. Eilish has a long career ahead of her and she will only continue getting better as she gets older.