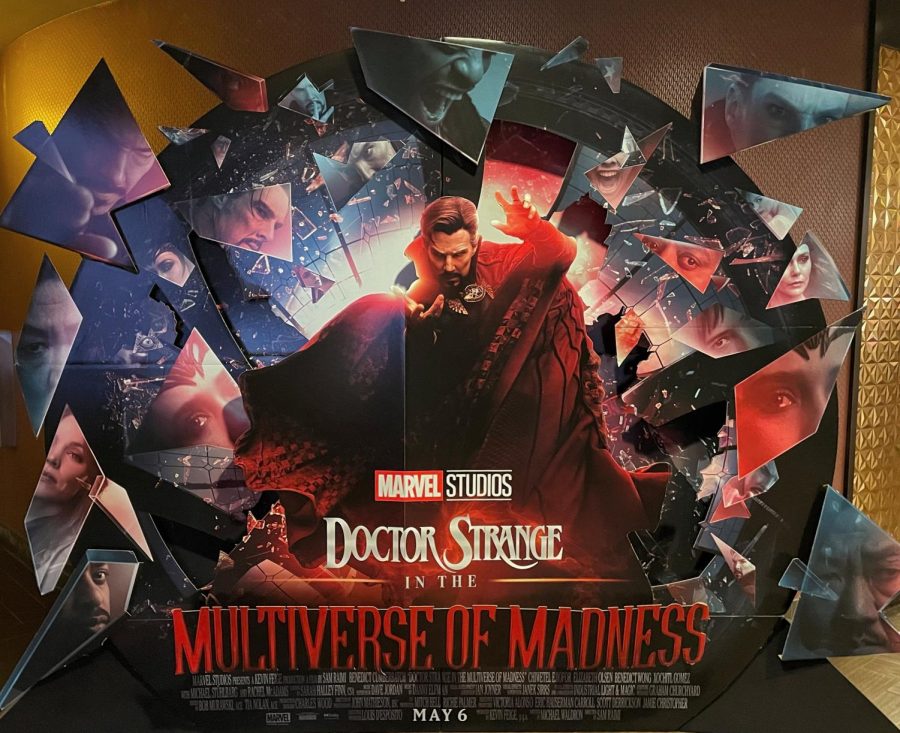 The long-awaited movie has finally arrived. Doctor Strange in the Multiverse of Madness has officially hit theatres this past weekend.

Filming for this movie started back in late 2020 and wrapped up shooting in April 2021. It was originally set to be released a few weeks after the WandaVision series on Disney Plus, but with the ongoing Covid pandemic and reshoots needing to take place, it was pushed to this month. These changes haven’t let up the excitement for the film, however.

This movie picks up from Spiderman: No Way Home, where Dr. Stephen Strange (Benedict Cumberbatch) casted a spell to protect Peter Parker’s (Tom Holland) identity and accidentally opened the multiverse, causing alternate realities to clash with their own. Strange teams up with fellow sorcerer Wong (Benedict Wong), Scarlet Witch aka Wanda Maximoff (Elizabeth Olsen), and newcomer America Chavez (Xochitl Gomez) to fix the problem with the multiverse.

The plot of this movie goes further back than just the newest Spiderman. Starting with Avengers: Endgame and the Avengers’ time heist, phase four of the MCU has dealt with the multiverse in some way in every project. Besides WandaVision, the Loki series really dove into what the multiverse could entail. Loki specifically dealt with the Time Variance Authority (TVA), an organization that stood separate from time and space but was used to control the main timeline to avoid a multiversal war. Here, Loki faced variants of himself and one of them, Sylvie, actually disrupted the timeline, which coincided with Dr. Strange accidentally opening the multiverse on his end.

This film featured a complex case of characters, including variants, alternate versions, and cameos from different Marvel heroes and villains. This included characters from the first Dr. Strange, specifically Mordo (Chiwetel Ejiofor) and Strange’s ex-fiancé Christine Palmer (Rachel McAdams). Some other characters that made appearance were Professor X (Patrick Stewart), who played the character in the X-Men series and Captain Carter (Hayley Atwell), who made her debut in Captain America: The First Avenger and claimed this title in the Disney Plus series What If…?. This will also be the first project that America Chavez will be featured in. She’s a teenager who received the ability to travel between dimensions by punching open doorways as a child, and she will have her own show on Disney Plus this summer.

So, what is the multiverse? It is basically a popular science-fiction trope that infinite parallel universes exist containing slightly different versions of the world we know. With this being said, this means that in every of these universes, there is an exact replica of oneself in that other universe. This is the reason that there will be at least one variant of the main characters in this movie.

There is a lot of speculation with this movie. The biggest one being the introduction of “The Illuminati” and this was later confirmed by Marvel with one of the latest trailers that was released. This is a fictional secret society group made up of the world’s most powerful beings. This includes Professor X, Tony Stark, Reed Richards (Mr. Fantastic), Black Bolt (King of the Inhumans), and Dr. Strange. With Iron Man being dead and Dr. Strange appearing to cause some (or most of the problems), it’s expected that the MCU version changed things. Mordo, a supervillain who is an adversary of Dr. Strange, appeared in the trailer saying, “The Illuminati will see you now,” which prompted speculation that Mordo will be a part of this group. If this group exists in this movie, it is likely they’ve been operating behind the scenes for a while already, possibly pulling some strings throughout the MCU’s biggest moments. It also means that it is possible that the MCU universe has their own version of this group that could be shown going forward.

Another speculation is the incorporation of the Marvel Comic: House Of M. This comic begins with Wanda giving birth to her two baby boys (which appear in WandaVision), alongside her husband Vision. Wanda’s powers are described as “chaos magic” but it wasn’t entirely clear how powerful she was, as she can change reality and Vision is dead, she didn’t have children, and she was far from happy (this sounds very similar to the plot of WandaVision). Long story short, Wanda goes crazy, Avengers and X-Men step in trying to neutralize the “threat”, Wanda creates a new world, and everything is now crazy. While this is unlikely to happen, especially with the movie run time of 2 hours, this could be the potential plot to an individual movie if Wanda were to get her own movie.

After Seeing the Movie:

There are no words to sum up this movie.

Once the movie began, there was no breaks or pause time from action. It was one thing to another. With that being said, I have a few critiques of this movie.

This first being that the commentary/lines were lack lustered. The cinematography and the CGI were amazing, probably some of Marvel’s best work, but the storyline is what broke the deal for me. The director Sam Raimi has come out and said that he never finished watching WandaVision, and that was quite evident. While this movie wasn’t primarily focused on Wanda and her problems, it was touched on enough that there should have been corrections. For instance, Vision never showed up at all, even when Wanda went to another universe. There has to be a version where Vision is there, which might have helped the actual problem all along (aka Wanda going crazy).

My second critique is that besides Wanda, every other character didn’t have much development. This movie is called Dr. Strange, yet there were no break throughs from him. The only things that were made clear was that in every universe, Strange never ends up with Christine Palmer and everyone around Strange asks him if he is happy. For Wong and especially America Chavez, they were treated as side characters when they should’ve definitely had bigger roles in this movie. I mean, America’s power is punching into different universes and through the whole film, she struggles with it! I am really curious as to what her series will evolve around, especially after this movie.

I think my biggest critique of this movie is that the trailers made this movie out to be something it wasn’t. In the trailers, it prompted that all these previous characters, like Ironman and Black Widow, would have variants in this movie. Not only that, but these trailers also made it out that the multiverse will really be touched on and how that will affect the plotlines going forward with other projects. In reality, this movie was focused on how Wanda was having her big break as the Scarlet Witch, she goes on a killing spree, all so that she can be with her kids in some other universe. Not to mention, but in order to do the last thing, she would have had to kill America to gain her powers! Very hypercritical.

Needless to say, if you really enjoy Elizabeth Olsen’s character and that is your main reason to watch this movie, you will enjoy seeing Wanda really go off the deep end. But if you are seeing it for any other character, you might not enjoy it. This movie is also the scariest/most gruesome movie I’ve seen from Marvel (besides Deadpool and Logan) and definitely not for younger children. I found myself jumping out of my seat at different parts in the movie, like I was seeing some horror film. Being a lifetime Marvel fan, including the X-Men and Sony’s movie contributions, this movie left my jaw on the floor at different parts of it. Seeing characters outside of the MCU that I also enjoy get destroyed- even if they are just variants-by Wanda in the span of seconds was shocking.

This was a good movie, but definitely not my favorite from phase four. I’m really curious as to what the end goal is, especially with the multiverse, as it seems like right now, there is no clear destination. I can’t wait to see where these characters will go and if more variants of heroes/villains will be introduced.